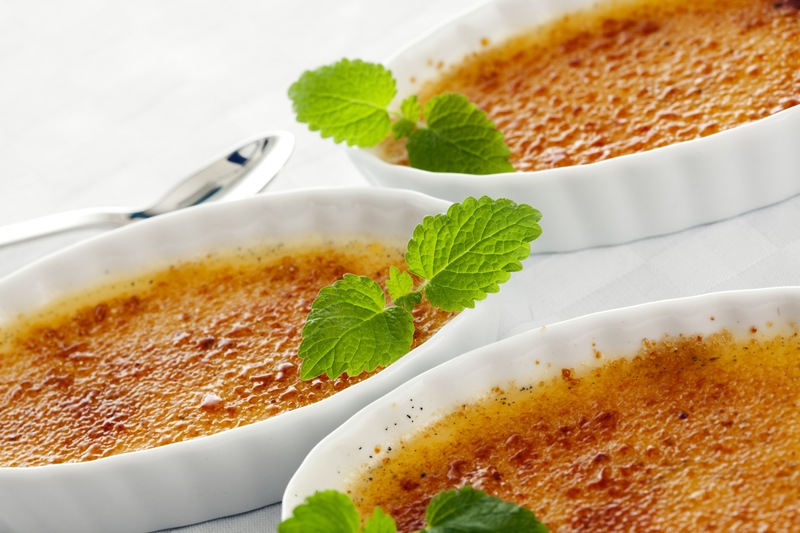 Rich yet delicate, simple yet effortlessly refined. On National Crème Brûlée Day, we’re celebrating all that makes this classic dessert so delightful.

Read up on the history and unique features of this beloved treat before enjoying it on July 27th (and all the year round!). Take a look.

Most might assume that crème brûlée is a product of French cuisine—and fairly so, since the name itself means “burnt cream” in the language! But as it turns out, France is only one of several European countries vying for the chance to say they came up with the coveted crème brûlée.

First up, let’s talk about France. With such a respected culinary scene, it makes sense that something as delicious as crème brûlée would come from here—and perhaps it did. The country’s proponents, in the question of crème brûlée, say that it was first introduced in the 1691 cookbook, “Cuisinier royal et bourgeois,” by one François Massialot, a respected chef.

So if crème brûlée was first introduced, formally, by the French more than 300 years ago, why are there still questions as to its identity? The problem lies in the historical penchant for custard, like the one you’ll find under the sugary crust of your crème brûlée. Even if historical custards, enjoyed in medieval times, were not quite the same as the modern crème brûlée, it’s easy to see how several countries could—independently of one another—create quite a similar dish and call it their own.

Take, for example, Crema Catalana, the Spanish take on a quite similar dish. Legend has it that nuns were preparing flan, a traditional Spanish dessert, for a bishop… only to undercook the flan, leading to a custardy consistency, and trying to mend their creation with a touch of sugar on top, which interacted with the heat and created an unusual crust effect. Sound familiar?

Then there is the claim of England’s Trinity College. There, in the late 1800s, the college-branded its school arms onto custard desserts for the students, leading to what is now dubbed Trinity cream, or Trinity burnt cream.

Perhaps the dessert lacks an official identity because, until recent years, no one was rushing to claim it! It was not viewed as a mainstream dessert (at least, not a particularly famous one) until it got the modern treatment and became a favorite in the United States in the 1980s.

One figure who helped to bring crème brûlée to the mainstream—even before it was a mega-hit among restaurants the world over—was “The French Chef” herself, Julia Child. The avid culinary and cultural figure showed American audiences the art of making a crème brûlée on her TV show, an early predecessor to today’s popular cooking programs. From her program on the subject, we gained a bit more understanding of what a crème brûlée was—and one choice quote, too, “everyone should have a blowtorch in the kitchen,” referencing the tool that’s used to give the crème brûlée its warm, crispy crust.

For her part, Child’s own blowtorch (and her entire kitchen setup) can be seen, on display, at the Smithsonian Museum of American History.

When it comes to deciding exactly where the crème brûlée came from, of course, the answer is not nearly as important as the delicious dish itself. Characterized by its custard interior—rich in texture, but warm and familiar in its vanilla flavor—as well as that classic, sugary crust, the “brûlée” to the “crème,” this is a classic treat for a reason.

Craving crème brûlée? Come on in and enjoy it here at Stonewood soon! Ours is a celebration of tradition, paired with a strawberry garnish for an extra touch of sweetness you’re sure to enjoy.