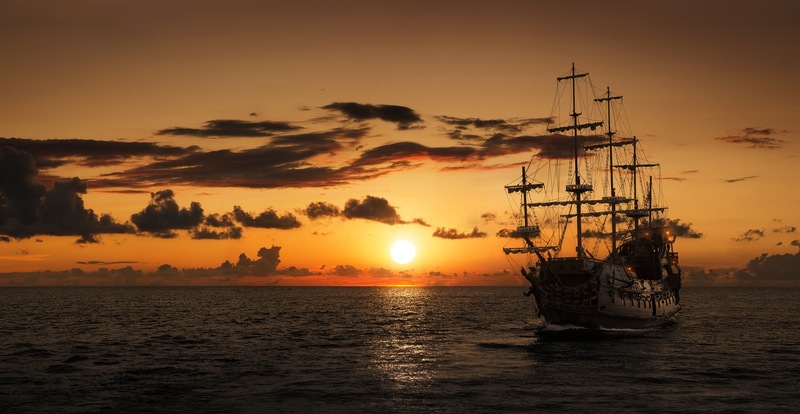 Ahoy, matey! Have you ever wanted to talk like a pirate… and maybe even eat like one, too?

September 19th is International Talk Like a Pirate Day. Hence, we’ve got pirates on our mind—how those old swashbucklers talked, lived, ate and explored. What better place than Florida, a state so deeply immersed in high seas history, to embark on our quest?

Read on as we share a few fun ways to practice your pirate phraseology, as well as meals—and destinations—inspired by life on the high seas. Take a look.

As the name of the day suggests, pirates tend to speak in a specific manner—one that’s fairly familiar to us thanks to years of pirate films and stories! As the legendary tales go, the “accent” is a gruff one—filled with lots of exclamations of “arrgh,” even if the speaker is not particularly angry. It also has its share of English influence, since many of the most notorious pirates hailed from England in their heyday.

With that being said, here are a few key pirate phrases you’ll want to remember…

- Ahoy, or “hello,” can also be used to get someone’s attention.

- Arrgh, an interjection which can be used to replace a variety of words, such as “wow!”

- Scurvy, a word to describe anything you dislike.

- Avast, or “stop,” from the Italian word for stop, basta.

- Blimey, an expression of surprise or fear.

Dining on the high seas?

The answer certainly depends on the pirate’s stomping grounds, and where he was in his journey. A pirate in the Mediterranean, for instance, would have had access to nearby ports (and, thus, plenty of stops for fresh food) that a pirate making a trip across the Atlantic simply would not have had.

Pirates, and sailors in general, famously lacked access to fresh fruits and vegetables. They did, however, enjoy pickled produce—so to dig into a dish of Fried Pickle Chips wouldn’t be entirely out of question on your “day as a pirate,” though the crispy, fried touch might be a bit more satisfying than what the pirates were used to. Another pirate staple was the “sea biscuit,” or hardtack, hard biscuits made with a simple combination of flour, water, and salt. It wasn’t quite as delicious as a brioche bun or Stonewood’s warm, filling pretzel bread, but it did the trick for pirates on long voyages.

Perhaps even more familiar to modern diners would be the pirates’ penchant for salmagundi, a salad dish served up with many colors and flavors, antipasto-style. Its eclectic nature (one that could never really be nailed down by any “one” recipe) is a result of the pirates’ unpredictable rations—they basically took what they could get—but a mixture of meats, eggs, cheeses, and greens sounds like a worthwhile meal, even today!

On those long trips, rum and beer were popular—not just because the pirates had a taste for it, but because it kept better than fresh water. So to drink like a pirate, you can’t go wrong with a rum-based cocktail. Options like Stonewood’s Pain Killer, or our Copper Bottom Mojito, certainly convey the swashbuckling spirit, but are made modern (and delicious) by the addition of fresh ingredients and syrups the pirates didn’t quite have!

Of course, the pirates might not have had the most well-stocked galleys in the world—but on their trips, they did discover quite a lot of foods. Especially interested in the culinary side of swashbuckling was 17th-century pirate William Dampier, who we have to thank for introducing many beloved dishes to the English language. He passed along phrases such as barbecue, tortilla, soy sauce and many more, as his trips ‘round the world certainly helped widen his breadth of culinary exposure.

Once you've filled up on pirate-inspired dishes, why not take some time to explore the storied pirate haunts that are scattered around the Sunshine State?

Tampa is one such spot, so touched by pirate lore that the “Visit Tampa Bay” website features a skull-and-crossbones-style logo and the intriguing slogan, “treasure awaits…” It was here that the legendary pirate José Gaspar was said to have stationed himself between pirating adventures. True or not, though, a yearly Mardi Gras-like festival, Gasparilla Festival, is a beloved tradition named for the legendary pirate.

Another top Florida spot to visit for pirate lore? St. Augustine! As America’s oldest city, it naturally saw its share of pirate comings and goings. Its famous fortress, the Castillo de San Marcos, and accompanying cannons are a testament to a time when the young city was constantly under threat of being plundered. Today, you can learn more about the area’s old pirate ties by visiting the St. Augustine Pirate & Treasure Museum, taking a cruise on the Black Raven Pirate Ship, or simply walking the storied streets here, which can’t help but give off a delightfully antiquated, Old-World feel.

Looking for ways to indulge your swashbuckling side? Learn the lingo, satisfy your pirate’s appetite at Stonewood or explore one of the Florida locations steeped in pirate history today!