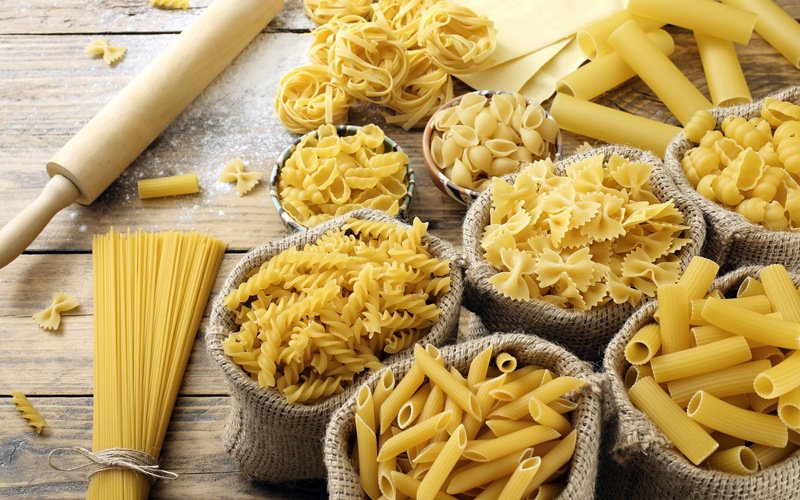 It’s time to celebrate everyone’s favorite dinnertime staple—pasta! Whether it’s served as a side dish or as the star of the show, pasta is a constant favorite among kids and adults alike. As we celebrate National Pasta Month this October, we’re sharing a few fun facts about pasta.

At the end of today’s blog, you’ll know a little bit more about this culinary classic—and you might even discover a Stonewood pasta dinner worth enjoying in the process!

Pasta may be delicious, but it’s not the most complex food to make—which is why it’s likely that different cultures developed pasta dishes independently and in their own time, rather than one culture having brought it to another (as is often suggested in the legend of Marco Polo, and how he brought pasta to Italy from his journeys in China).

The ancient Greeks and Romans, for example, both enjoyed variations of what we now consider very early pasta dishes. Roman poet Horace wrote about “lagana,” fried dough sheets, that might be a predecessor of traditional pasta. Meanwhile, wheat noodles were eaten regularly in Han Dynasty China.

It wasn’t always covered in sauce or toppings

Italian pasta is known for its rich sauces—but this wasn’t always the case. Before the tomato had even arrived in Europe from the Americas, pasta was consumed dry and with the fingers. When tomato sauce first appeared in the late 18th century, utensils were finally used.

Pasta may be known as a key carbohydrate, but it’s also got its share of protein! The protein amounts increase when egg is used in the noodles, or, of course, when add-ins like meat and cheese are included.

When it comes to pasta descriptions, the answer’s in the name

Not sure what to expect from a new pasta dish? The answer can almost always be found in the name of the pasta itself. The classic spaghetti comes from the word for “little strings,” for example. Linguine (which you’ll find in our flavorful Shrimp Palermo) refers to “little tongues,” which mirror the flat, wide shape of this pasta; farfalle, on the other hand, means “butterflies” (but also closely resembles bowties!). It can be found in our Blackened Chicken Pasta, which features pasta and chicken tossed together in a delectable chardonnay cream.

You’ll find similarly meaningful descriptors in the name of pasta cooking methods. Al dente, for example, means “to the tooth”—it refers to pasta that is firm and, in the eyes of most pasta lovers, the most favorable way to cook pasta.

Pasta can vary across oceans

Be mindful of where you are when you order pasta, of course! Some types can vary from place to place. Vermicelli, for example, means “worms”; in the US, it refers to a pasta that’s thinner than spaghetti. In Italy, ordering vermicelli will result in a dish of noodles slightly thicker than spaghetti!

Pasta is a substantial part of international diets

When we say substantial, we mean it! As you might expect, the average Italian eats the most pasta, consuming more than 50 pounds’ worth every year. Pasta consumption across the Atlantic might be less, but it’s still noteworthy—the average North American eats about 15 pounds a year!

It first came to America via the English—not the Italians

While we have Italian influences to thank for our wealth of pasta dishes, pasta first arrived in America by way of the English (who, of course, learned of pasta from the Italians!). The English take on pasta included pasta that was cooked until it was very soft, then baked with a mix of cream and cheese. The Italian immigrants of the late 18th and early 19th centuries brought over pasta dishes packed to the brim with ingredients like hard cheeses, vegetables, and garlic.

New dishes came out of the cultural “melting pot”

Of course, while the Italian dishes were much more diverse in terms of ingredients, they didn’t feature meat as frequently as Americanized Italian dishes do today. This is because meat was available more freely in America, and could thus be incorporated into pasta dishes with ease.

With time, new ingredients were added into pasta dishes—and the very material the pasta was made with changed from time to time as well! Modern cooking methods make it easier than ever for chefs to add unique flavors to traditional recipes—our Short Ribs with Butternut Squash Ravioli, for example, features ravioli (a timelessly delicious stuffed pasta) that brings out the rich, nutty taste of butternut squash.

Which of these pasta facts surprised you the most? Let us know below! We look forward to serving you and your family the very best in pasta taste and texture.

Make tonight extraordinary! Each of our 12 Stonewood locations has its own unique community flair—but they all commit to the same excellence in fine ingredients and kitchen expertise.  Find a Location and be sure to Sign Up for our E-Club for news and special offers!