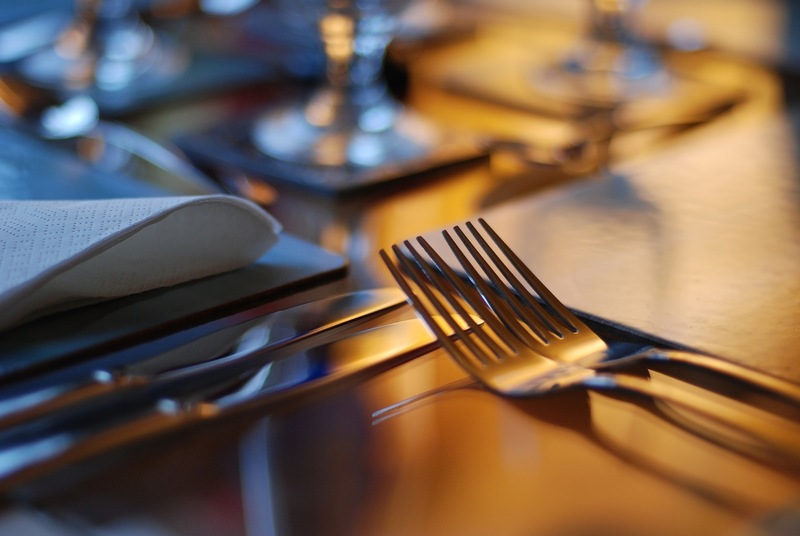 We all know the basics of dinner etiquette—keep your elbows off the table, for example, and always place your napkin in your lap. Have you ever wondered about the reasons behind these practical (and not-so-practical) table manners?

In today’s blog, we aim to find out!

Elbows off the table

While more formal settings might stick to this traditional rule, many families (especially while dining at home) will opt for a more laidback experience, elbows A-okay.

Whether or not you follow this practice, it seems to have long-established roots—though there are several theories as to where it first began. Some say that sailors would be used to dining with their elbows on the eating surface, since they had to balance themselves while on the rocking waves—when they carried this habit onto land with them, it was a clear-cut sign of their low status and unruly roots on the water.

It is also said that eating with one’s elbows on the table was seen as rude, since bustling medieval feasts would not allow one much room for having extra limbs take up space. If you had your elbows on the table, you might be seen as suspicious (guarding yourself and your meal from the eyes of others) or downright careless (preventing others from easily accessing their food, drinks or cutlery).

The use of cutlery

Using cutlery for meals (barring finger food or handheld classics like burgers) isn’t considered so much etiquette as it is a standard for meals across the country—but was it always this way?

Humans have long used knives to carve meat—and, later, spoons to enjoy otherwise impossible liquids. But the fork was not always seen as such a necessity, especially since most foods that we now eat with a fork (meats, vegetables, etc.) were traditionally eaten by hand or scooped onto pieces of bread for easy maneuvering. Even the earliest pasta was consumed by hand (that is, until slippery, messy sauce warranted more sophisticated tools). When the fork finally did arise, it was first seen as a dainty, unnecessary tool for the elites until it caught on in the 17th century among the masses.

Drinking or eating while sticking out one lone pinky finger is almost universally seen as a sign of class (sometimes unnecessarily so). The history behind this trend is a little less clear, however—some have suggested that it stems from the small size of cups and cutlery, forcing one to stick out their smallest digits. Others theorize that elite diners would not want to touch glasses that had been touched by servants any more than necessary. Finally (but by no means conclusively), some posit that medieval diners would eat meat with their hands and had to leave a finger or two free for dipping into spices.

Some families stick to the formalities of tradition, while others prefer a simpler approach to dining. What’s your method? You bring the table style, and we’ll supply the food and atmosphere!

Make tonight extraordinary! Each of our 12 Stonewood locations has its own unique community flair—but they all commit to the same excellence in fine ingredients and kitchen expertise.  Find a Location and be sure to Sign Up for our E-Club for news and special offers!